When I started my vacation on 10 March, it was just days before the world began to turn in on itself because of COVID-19. Nothing had really changed for me, though. I was still waking up around 3:30 or 4:00 to write while the rest of the world slept. Then, after a run, I’d return to the business of writing for a good chunk of the day before prepping dinner late in the afternoon. My evening ritual of either reading or watching reruns of Two and a Half Men rounded out the day. I had my groove on.

But as my vacation transitioned to an involuntary leave of absence and then a layoff, there was a shift. Since I had the condo to myself, I started going to bed later, which meant getting up later. Still writing in the morning, I’d unexpectedly become an early afternoon runner (lesson learned: not my greatest time to run). Something else was at play, too. My body was adjusting to not zipping through time zones. I had lost my rhythm, fell out of my groove. END_OF_DOCUMENT_TOKEN_TO_BE_REPLACED

There is a lot happening in the world that inspires, especially how, in different communities across the globe, we’ve come together to support each other during the COVID-19 pandemic. There are also things that cause us to pause and show the worst of man’s inhumanity to man, and, consequently, sends people marching into the streets to demand change. George Floyd’s death reflects the latter. Enter hope… END_OF_DOCUMENT_TOKEN_TO_BE_REPLACED

Last year, someone suggested in a tweet that I share my essay, “On Being Black.” My excuse, then, was that the timing was bad. I was in the middle of a major writing project. In an already ‘busy’ life, I didn’t have time to scour through file folders to find it and then retype it (the only copy I had was a scanned PDF version). But procrastinating one day, I searched it out and, after reading through it, thought, Share this? Absolutely not.

The essay stirred up a lot of emotion, and a feeling I’d, then, rather deny than acknowledge: that I’m still searching for my way home, trying to find my place in the world.

The world is changing, yet it’s also staying the same. And this essay — seventeen years after it first appeared — begs the question: have I changed or have I, too, stayed the same?

My first literary credit, “On Being Black” was published in the 2003 Winter Edition of Other Voices: Journal of the Literary and Visual Arts. I present here, having only corrected an obvious spelling mistake, the original published version.

This is the third and final installment in the Take Positions for Takeoff series. As a reminder, in Part I: From Chaos to Possibility, I wrote about the initial impact of COVID-19 on my life. Then in Part II: Be Ready for Anything, I shared some of my experiences as a flight attendant. Now, let’s talk about the biggest takeaway from my time in the aviation industry: patience. 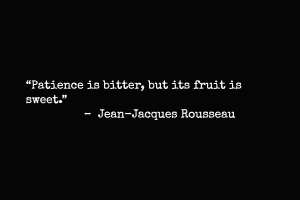 They say patience is a virtue. Maybe that’s true. And I often thought of myself as a patient person … until I became a flight attendant. At 38,000 ft, in a pressurized cabin, and when the only thing on offer is recycled air … human behaviour changes dramatically. Maybe the frontal lobe suffers some form of damage. I don’t really know. Or maybe it’s the stress of air travel and passengers trying to figure out all the different rules and restrictions that vary from one airline to another, from one country to another. Whatever the reason, it’s an opportunity to see people at their best and — unfortunately, and growing more frequently — at their worst. END_OF_DOCUMENT_TOKEN_TO_BE_REPLACED

Because they didn’t see you, tired and battered from jet lag, dealing with the idiot complaining it took too long to start the meal service when you (like the rest of the passengers) were seated during the first hour of the flight due to moderate turbulence. They didn’t see you, at 37,000 feet above the earth, performing first aid on a passenger who just passed out when the jerk in 37H came up to you and asked, “Could I get another red wine?” They didn’t see you, holding in your own fear and remaining calm to reassure passengers, as you prepared to evacuate the aircraft. No, they didn’t see you living out your mantra: Be Ready for Anything. END_OF_DOCUMENT_TOKEN_TO_BE_REPLACED