Restlessness. For me it’s a word that’s as dangerous as procrastination. It has power, real power, to tackle me to the ground the way the ball carrier does in a game of rugby. Restless, I feel caught between the mountain and the valley. It’s a type of paralysis. I don’t know how to move forward, which leaves me feeling hopeless. 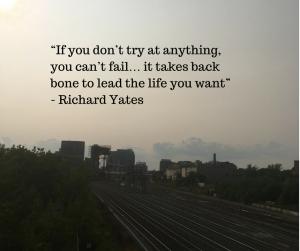 In a way, I am caught now between the mountain and the valley as I work to recreate my debut novel, Freestyle Love. First published in 2011, it sold about 300 copies and didn’t earn great reviews. I had done a good job (or so I thought) of editing the manuscript and had sent it out to a couple of beta readers. I thought I’d done something right because, after receiving about a dozen rejection letters, it was accepted for publication by a traditional publisher who asked for minimal changes. I was hoping that I had a bestseller on my hands, but guess what? The joke was on me! Looking back, I realize I didn’t understand the publishing process.

With the publication of my novel, I knew me and my writing would be open to praise and criticism. In the age of social media, I underestimated how much the nastiness of some reviews would sting. I took it personally, and then the reviews had me doubting myself as a writer. Who did I think I was daring to publish a book? Did I really have anything meaningful to say? What was I thinking?

Funny thing… Despite the not-so-glowing reviews, I kept writing. Every day. Even through the doubt, there was something that couldn’t be taken away from me — not from the online “haters” who kept on hating, not from the people who told me I was chasing a pipedream. It was this: I am a writer. I say that with conviction. It is, today, an affirmation of who I am. I’m a writer because there is, deep within me, a will far greater than my own that compels me to write. As my good friend Adrienne encouraged, I worked each day to “stay grounded in your conviction that you’re doing what you want to do and feel called to do.” Writing was my calling. I chose to heed the call.

The Courage to Try Again

It took a little time — five and a half years in fact — before I dared to try again. In February 2017, I decided to self-publish. I wasn’t as naïve and I’d learned a lot since the publication of my first novel. Dave Taylor of thEditors.com provided great feedback on my first self-published novel, The Flowers Need Watering, that helped me to create the best book possible. This summer, I turned to Dave again when I decided to take another stab at Freestyle Love because it’s a story I’ve always loved. It started out as a short story (a trilogy, actually), before being turned it into a novel. 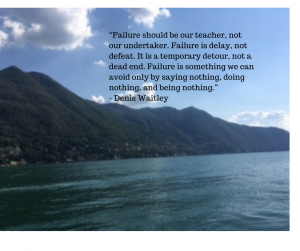 So I am, as mentioned early, caught between the mountain and valley as I make my way through what seems like a long, and at times difficult, rewrite of Freestyle Love. But I’m not discouraged. On the contrary, I feel empowered. Why? Because I’m still doing what I love. I’m taking the premise of a book I love and working to make it better. That proves to me that as I grow and mature as a writer, I’m not letting failure rule me. It reminds me of what Winston Churchill said: “Success is not final, failure is not fatal: it is the courage to continue that counts.”

When the revised edition of Freestyle Love hits the bookshelves (hopefully later this year), me and my writing will once again be in the public domain and fair game for the critics. I’m ready for whatever comes my way because I stand safe in the knowledge that I’ve done what I can to make the story sing.

As the day draws to a close, that restless feeling has begun to ebb. That’s because when I sit down to write — a blog post, a chapter of a novel, a short story — the act of writing instantly quells my doubts and fears. Writing restores a sense of hope, reminds me that I’m on the right path. That helps me to hold steadfast to my faith … in my writing and in myself.

I take to heart what Goethe told us: “Whatever you think you can do or believe you can do, begin it. Action has magic, grace and power in it.”

How do you deal with failure? When the odds seem stacked against you, what motivates you to keep pushing forward? Let me know in the comments section below.