Failure isn’t the end of the journey. It’s the beginning.

And life is a journey, and doubly so if you’re a writer, painter, musician — anyone who loves to create or who’s living a life that allows them to follow their passion. I’m a writer. I may not make my living as a writer (not yet, anyway), but I write every day. It doesn’t matter if I’m at home in Toronto — Milan, London, Hong Kong or Saskatoon — I write. Every day. 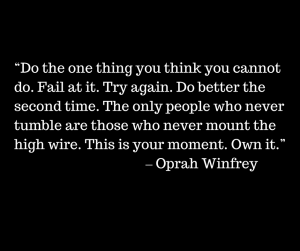 Writing is, without a doubt, my calling. Heeding the call, I started submitting my short stories, essays, poems and novel-length manuscripts for publication as a university student. Some were accepted for publication while a lot were not. In early 2011, I hit the literary jackpot, or so I thought. A publishing house had accepted the manuscript I’d submitted to them, and I was ecstatic. I’d worked hard on that manuscript. I’d edited it, re-edited, and edited some more. I had asked others to read the manuscript, took their feedback seriously and made the necessary changes. The publisher’s biggest beef with the story was the head hopping. I was breaking POV rules all over the place. I made the corrections, sent the manuscript back and waited. When the book launched at the end of 2011, I hoped (naively) for success the likes of Stephen King, Danielle Steel and other successful writers. Boy oh boy, was I in for a rude awakening.

Freestyle Love, my debut novel, didn’t become a bestseller. Far from it. It barely registered on any type of scale. Reviews came in — some good, some not so good — and I really didn’t know what to think. I’d worked long and hard on the book. I believed (again naively) that I’d done things right. Wrong!

Five years later, when the book rights reverted to me, my publisher and I parted ways. That didn’t surprise me. I wasn’t a bestselling author. I was a barely-selling author. But I was still writing, and that had to mean something. It meant I wasn’t ready to give up. Only this time, I decided to self-publish my next novel, The Flowers Need Watering (now available on Amazon).

I knew the stakes would be high after deciding to self-publish. When it came to editing, I knew I had to be just as meticulous as a traditional publisher. Now I was the publisher. And to stand any chance of commercial or critical success, I had to make sure I could offer the best book possible to readers.

I learned a hard lesson with Freestyle Love, one that I wouldn’t repeat with The Flowers Need Watering. I learned the importance of a professional editor. So I started doing research. Initially, I balked at the cost, mostly because, at the time, I didn’t know what type of editing I needed. After a lot of searching, I sent an excerpt from my manuscript to thEditors.com (they edited the sample free of charge, and that gave me an opportunity to see the editing service they provided before committing to them). When the edited manuscript came back, I was blown away. I’d found the person who, I believed, would help me bring out the best book possible.

Dave Taylor is a fantastic editor who looks at the characters’ behaviours and how that impacts the story: “Malachi’s Father – Very sympathetic character during his death scenes. I think again you could show a little more from him in the scene where Malachi comes out.”

Although sometimes it “hurt,” Dave is always bang on about when a scene, or an entire chapter, can be cut: “Having read the next chapter, I definitely feel you can cut this one. What you can do is simply SHOW the interaction between Melinda and Susan at the end of the next chapter as described below.”

Dave’s comments are not only encouraging but on point. His insights helped me to tighten the plot, create engaging (although not always likeable) characters, and a better book overall.

Why I Keep Returning to thEditors.com

This is what I love about working with Dave:

Whether you’re thinking about self-publishing or want to go the way of traditional publishing, having your manuscript professionally edited is key to your success. When you reach the point when your manuscript is ready for editing, I highly recommend that you contact thEditors.com. Let them help you bring out the best book in you. I know I will!