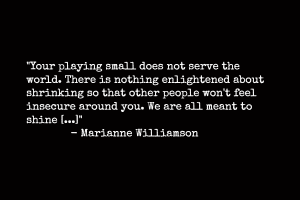 As a kid, I hated rules. That’s because rules weren’t fun. They were meant to mould my behaviour and, perhaps unknowingly, stifle my creativity.

Rule: I had to eat everything on my plate before I left the table (that was hard, especially on the nights my father served burnt, chewy liver for dinner).

Rule: I couldn’t stay out late on a school night.

Rule: As long as I lived in my parents’ house, I’d do as they say.

It probably comes as no surprise that, growing up, I was a rule breaker. Tell me I couldn’t do something, and I’d set out to prove that I could. Tell me I had to do something one way, I’d do it a different way and achieve the same result. ‘Rebelling’ was second-nature to me. In a way, it led me down the path to becoming who I am today.

Breaking the rules taught me a valuable lesson: that I had what it takes to be who I am, and not who others wish me to be. It came with a ‘price’ in that the people who wanted me to remain the same — friends and family alike — eventually slipped out of my life. To be honest, for a time that bothered me. But only until I understood that being my truest self is the greatest gift I could give to myself and the world. Marianne Williamson says it best:

“Our deepest fear is not that we are inadequate. Our deepest fear is that we are powerful beyond measure. It is our light, not our darkness that most frightens us. We ask ourselves, ‘Who am I to be brilliant, gorgeous, talented, fabulous?’ Actually, who are you not to be? You are a child of God. Your playing small does not serve the world. There is nothing enlightened about shrinking so that other people won’t feel insecure around you. We are all meant to shine, as children do. We were born to make manifest the glory of God that is within us. It’s not just in some of us; it’s in everyone. And as we let our own light shine, we unconsciously give other people permission to do the same. As we are liberated from our own fear, our presence automatically liberates others.” 1

Not being small meant doing the thing that I love the most: writing. As I gave myself over to it, there was a mega shift in how I looked at rules. I saw their potential, how they could help me create the life I wanted.

From Rule Breaker to Rule Setter

When I first knew I wanted to be a writer, my goal (naïve as it was then) was to sign on with a well-known publishing company like HarperCollins or Penguin, or a literary agency. Self-publishing and being an indie author like we know them today didn’t exist. The one thing an emerging writer like myself wanted to avoid was being swindled by a vanity press.

Since then, the publishing industry has been completely turned on its head. Now, it’s easy and affordable for writers to publish their own works through Amazon’s Kindle Direct Publishing (KDP) and other platforms. The competition is fierce, which makes it hard to get your book to stand out in a crowded marketplace.

But when you do what you love, you don’t throw in the towel when the rejection letters start piling up. You don’t give up, either, when your first book flops (as mine did). You try, try, and try again because this is the thing that you must do. It’s the reason you’re here on earth. It’s your calling. And you must heed the call.

I write for the love of writing, to tell a story, to [I hope] offer a unique view of the world. And even though most days the idea of ambition and being successful makes me squeamish — almost like I don’t feel I deserve it — my aim is to write full-time. It’s why I show up every day to write. My dream won’t come true without me putting in the time and doing the necessary work.

Working to build a writing career around a day job, familial responsibilities and life in general, it’s pretty easy for me to get distracted. To stave off distraction — procrastination, resistance, self-doubt, etc. — I needed rules to get me through each day. When I became a self-published author, and responsible for marketing and promoting my book, rules became even more important. I had to find balance, especially when dealing with social media, which permeates all aspects of our lives.

Yes, I needed rules to stay focused and increase my productivity as I worked to achieve my goals. For me, it all comes down to this:

5 Rules to Live By

These are my rules. They work for me as I strive to create the life I imagine — to let loose the truest, ultimate expression of who I am. I can’t afford to break them. Breaking the rules creates havoc and puts everything I’ve worked hard to achieve at risk.

As I continue to evolve, the rules may change or need to be tweaked.

But for now … I’ll keep playing by the rules.